open-access license: This is an open access article distributed under the terms of the Creative Commons Attribution License (http://creativecommons.org/licenses/by/2.5/), which permits unrestrictive use, distribution, and reproduction in any medium, provided the original work is properly cited.

Theoretical flexible docking studies were carried out on a number of triterpenoids previously shown to be inhibitors of topoisomerase II in order to assess the nature of binding of these non-intercalative inhibitors to the enzyme. The molecular docking results suggest that most of the triterpenoids preferentially bind to the DNA binding site of topoisomerase II, while a few also bind to the ATP binding site. These results provide some insight into the mode of activity of these cytotoxic natural products.

Topoisomerases are essential enzymes that catalyze modifications to the tertiary structure of DNA. There are two well-characterized classes of human topoisomerases. Topoisomerase I acts by breaking and religating one DNA strand [1], while topoisomerase II involves double-strand breaking [2]. These enzymes serve to relieve DNA twisting and supercoiling, playing key roles in replication, transcription, and recombinant repair. Topoisomerase II is highly expressed in rapidly proliferating cells [3] and is therefore an attractive target for antitumor drugs.

The catalytic inhibitors, on the other hand, block the catalytic activity of DNA topoisomerase II but do not stabilize the DNA-topoisomerase II cleavable complex [5, 8]. Examples of catalytic topoisomerase II inhibitors include the anthracycline aclarubicin, the polyanionic compound surname, the coumarin novobiocin, and bisdioxopiperazines such as sobuzoxane and dexrazoxane [9]. These agents inhibit the catalytic activity of topoisomerase II by preventing the binding of the enzyme to DNA. A number of natural and semisynthetic triterpenoids have shown topoisomerase II inhibitory activity. These include 3,4-seco-8βH-ferna-4(23),9(11)-dien-3-oic acid (1) and its corresponding alcohol derivative (2) [10]; seco-3,4-friedelin (3), seco-3,4-taraxerone (4), lupeol (5) [11]; fomitellic acids A and B (6 and 7) [12]; ursolic acid (8), oleanolic acid (9), betulinic acid (10), acetyl α-boswellic acid (11) [13]; demethylzeylasterone (12) [14];

The binding energies of the lowest-energy poses for each of the triterpenoid topoisomerase II inhibitors for the DNA binding site (PDB: 1bjt [22] and 2rgr [23]) and the ATP binding sites (PDB: 1qzr, 1pvg, and 1zxm) are summarized in Table 1. The lowest-energy docking poses for most of the triterpenoids is the DNA binding site of topoisomerase II (see Figs. 1 and 2), including 1-3, 5-14, 16,and 19-22. The key amino acid residues at this binding site are Arg 690, Asp 687. Gln 599, Gln 739, Gln 743, Glu 738, Glu 831, Gly 737, Gly 832, Ile 833, Lys 598, Lys 700, Phe 595, Ser 691, Thr 596, and Trp 597 (Fig. 3). Mizushina and co-workers [24] found this to be the preferred binding site for unsaturated fatty acids with yeast topoisomerase II. Not surprisingly, the nature of binding of these lipophilic triterpenoids is largely hydrophobic, and the triterpenoids can dock in various orientations in this binding pocket. There are some trends, however. The lowest-energy pose of lupeol (5) is such that it forms hydrogen bonds between the C(3) hydroxyl group of the ligand and the carboxylate of Asp 687 and the guanidinium of Arg 690. 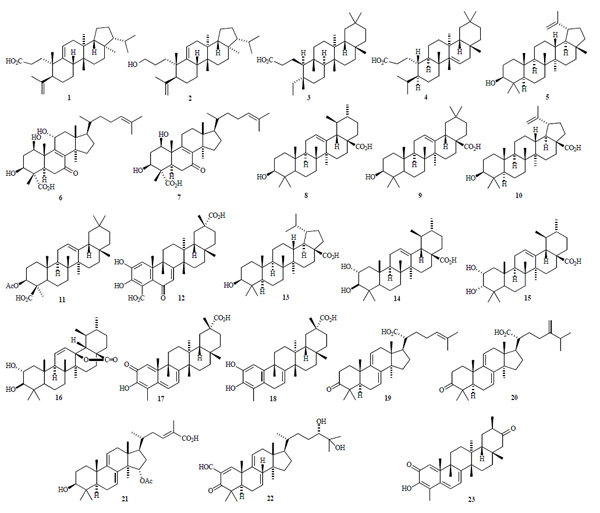 In the ATPase domain of yeast topoisomerase II, demethylzeylasterone (12) forms salt bridges between the C(23) carboxylate and the ammonium group of Lys 11 and the guanidinium group of Arg 77, as well as a hydrogen bond with Ser 128; hydrogen bonds between the C(29) carboxylate with the amide hydrogens of Arg 141, Gln 365, Gly 145, and Tyr 144; and a hydrogen bond between the C(6) ketone and the hydroxyl of Tyr 12. Both celastrol (16) and dihydrocelastrol (17) dock in the same orientation as demethylzeylasterone, with the same interactions between the C(29) carboxylate and Arg 141, Gln 365, Gly 145, and Tyr 144. Tingenone (23), known to be a cytotoxic agent [27], but not yet shown to be a topoisomerase II inhibitor, also docks into the same site with the same orientation (see Fig. 6). Tingenone, therefore, would be expected to be a topoisomerase II inhibitor. Friedelane 3 does not have planar rings and therefore binds to the ATP binding site differently than the quinone-methide triterpenoids 12, 17, 18, and 23. Key hydrogen bonding interactions between seco-3,4-friedelin (3) and the protein are between the C(3) carboxylate of the ligand and the amide of Asn 129 as well as the hydroxyl of Ser 128.

The binding of the quinone-methide triterpenoids to the ATPase domain of human topoisomerase II is similar to that observed in the yeast. Demethylzeylasterone (12) interacts with Arg 98 and Ser 149, through the C(23) carboxylate. The C(29) carboxylate interacts with Arg 162, Gln 376, Gly 166, and Tyr 165; and the C(6) ketone hydrogen bonds with Tyr 34. Similarly, seco-3,4-friedelin (3) and seco-3,4-taraxerone (4) bind to the ATP binding site of human topoisomerase II through hydrogen bonding between the C(3) carboxylates of the ligands and Asn 150 and Ser 149. The binding energies of the quinone-methide triterpenoids to the ATP binding sites of topoisomerase II are comparable to those calculated (Molegro) for known ATP binders salvicine [28] (average binding energy = -25.2 kcal/mol) or etoposide [6, 7] (average binding energy = -22.4 kcal/mol).

There is no discernable trend between the calculated binding energies in this study and the reported topoisomerase II inhibitory activities. This may be due to the different sources of topoisomerase II used (e.g., yeast, human, parasite), or the fact that enzyme inhibitory concentrations have large differences. Thus, for example, ursolic acid has been reported to have IC50 values of 20 μM [13], 36 μM [16], 150 μM [12]; etoposide had MIC values of 20 μM [15] and 25 μM [11]; and acetyl α-boswellic acid had MIC values of 3 μM [13] and > 50 μM [29].

Molecular structures for the triterpenoids were built using Spartan ’06 for Windows [30] and geometries optimized using the MMFF 94 force field [31]. Protein-ligand docking studies were carried out based on the crystal structure of the DNA-binding and cleavage core (residues 409-1201) of yeast topoisomerase II (PDB: 1bjt) [22], the crystal structure of the DNA-binding and cleavage domain (residues 419-1177) of human topoisomerase IIα bound to G-segment DNA (PDB: 2rgr) [23], the crystal structure of the N-terminal ATPase region of yeast topoisomerase II bound to dexrazoxane (PDB: 1qzr) and imino-ATP (PDB: 1pvg) [25], and the crystal structure of the ATPase region of human topoisomerase IIα bound to imino-ATP (PDB: 1zxm) [26]. All solvent molecules, cofactors, and co-crystallized ligands were removed from the structures. Molecular docking calculations for all compounds were undertaken using Molegro Virtual Docker 2.3 [32, 33]. Because it is unknown how and where triterpenoids might bind to topoisomerase II, many different sites were examined in order to probe the entire protein structure for 1bjt. For the 2rgr structure, the DNA was removed from the structure and the triterpenoid ligands were docked in the DNA binding site of the protein. In the case of the ATPase region, only the ATP binding pockets of 1qzr, 1pvg, and 1zxm, were modeled. A sphere of radius 15 Å was centered on the binding site in order to allow each ligand to search. Different orientations of the ligands were searched and ranked based on their energy scores.

A number of triterpenoid natural products have shown potential antitumor activity by inhibition of topoisomerase II. These enzyme inhibitors are not planar molecules and clearly, then, do not intercalate DNA to form stable cleavable complexes with topoisomerase II. The mode of inhibition as revealed by this study may be either to bind to the enzyme at the DNA binding site, preventing DNA binding, or binding to the ATP binding site, conformationally locking the enzyme and thus preventing DNA binding. The calculated binding energies of the triterpenoid inhibitors, however, do not correlate well with experimental inhibitory concentrations.